NEW YORK, Aug. 6, 2021 /PRNewswire/ — GRAMMY-nominated trumpeter, composer, producer, and artist THEO CROKER has announced a new album BLK2LIFE || A FUTURE PAST, his first since the critically acclaimed Star People Nation, the album that earned him the nomination. Available September 24 via Sony Masterworks, the album was produced by Theo Croker and features Wyclef Jean, Ari Lennox, Gary Bartz, Charlotte Dos Santos, Iman Omari, Malaya, and Kassa Overall.  With the announcement comes a video for the new track “STATE OF THE UNION 444” Ft. Wyclef Jean who notes:

“I love the idea of taking it back to the future. The vibe of this song is just when we look at what has happened to us as a people, like literally in the past 40 years, and how history constantly keeps repeating itself … so this is like a cry of the youth, but it’s a different kind of cry – we’ve heard cries of freedom. We’ve cried for freedom so many times, and we’ve sung “we shall overcome” so many times, but we still don’t see things overcoming. So, this is like the youth – when you hear Theo hitting those horns, and you hear that track – it’s a revolution. And this revolution, unlike the other revolution, this one has been televised. And it’s been televised through every social outlet in the world. The idea of oppression, the idea of equal rights, the idea of “when are we gonna really get justice?” The idea of what real human rights is… but at the same time, keep in mind, this is Theo Croker and Wyclef Jean – so we gotta keep it sexy at the same time. We’re gonna make y’all think, but we’re also gonna make y’all move. Just to say we celebrate our ancestors. At the end of the video, I start to speak Creole, and you’ll feel that energy when we start to turn the whole thing into a celebration and into a movement.”

A contemporary oratorio, the 13 tracks that make BLK2LIFE || A FUTURE PAST are inspired by the forgotten hero’s journey towards self-actualization within the universal origins of blackness. It’s a sonic celebration of Afro-origin, and ultimately a reclamation of the culture, for the culture. “Our hero receives a transmission from his ancestors while in meditation that sets him on a mission to raise the planet’s vibrations through music that defies the confines of a ‘genre’ and frees the culture from the imminent threat of commercial gentrification,” says Theo.

Written in the solitude of his childhood home in Leesburg, Florida, during the pandemic much of the album was informed by psilocybin meditations and astral travels. By retreating inward, Theo extracted a universal story with major implications and spiritual resonances.  “In the beginning, the universe was birthed out of a black hole,” he says. “Everything came from blackness.  Black is every color combined.  So, all cultures are full of this rich blackness.  It isn’t a racial statement; it’s about understanding and accepting that this is not a new cultural phenomenon or new science, that we can reclaim our origins, traditions, and culture to better the future. I’m making a statement with the title and project, ‘I can be an artist first before I am a black artist’. I can be a musician, creator, and producer without category.”

Theo will hit the road in support of the new album starting with a two-week residence at San Francisco’s Black Cat this August. Other dates will take him to select cities in the U.S. with more dates across the world – stops including Oslo, Prague, Milan, Paris, London, Berlin, and more – full tour schedule and ticketing info can be found here.

Listen to previously released “HERO STOMP || A FUTURE PAST“

ABOUT THEO CROKER
Theo Croker is a storyteller who speaks through his trumpet. A creative who refuses boundaries, the GRAMMY®️ Award-nominated artist, composer, producer, thought leader, and influencer projects his voice through the music. After seven years of sojourn in Shanghai, Croker crash-landed with a simmering original sound on the 2014 Dee Dee Bridgewater-assisted album Afro Physicist. Following the success of Escape Velocity in 2016, he ascended to a new stratosphere with Star People Nation in 2019. The record garnered a nomination in the category of “Best Contemporary Instrumental Album” at the 62nd GRAMMY®️ Awards. It attracted widespread critical acclaim including Stereogum, Paste, and The New York Times who called it “an album that gallivants from swirling, left-field hip-hop beats to propellant swing to entrancing passages of African percussion. Through it all, Croker’s understated trumpet playing holds his small band together with swagger and poise.” Along the way, he also lent his sound to platinum-selling albums by everyone from J. Cole to Ari Lennox while touring his band across the globe many times over. In 2020, he hunkered down at his childhood home in the midst of the global pandemic and wrote his sixth full-length album, BLK2LIFE || A FUTURE PAST, releasing September 24th via Sony Music Masterworks. 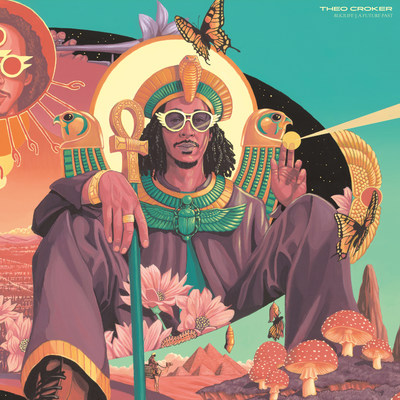