NEW YORK, June 2, 2017 /PRNewswire/ — Following months of speculation and anticipation, the ladies of FIFTH HARMONY release their newest single “Down” featuring Gucci Mane today.  The worldwide multi-platinum group set off mass hysteria on Monday with the announcement of “Down,” the first of new music since the 2016 release of 7/27.  Ally, Dinah, Lauren and Normani celebrated the release by taking the track straight to the stage, performing alongside Gucci Mane for Good Morning America‘s Summer Concert Series. Their performance in Central Park also included their 4x-platinum smash hit “Work From Home,”  with a special appearance by Ty Dolla $ign. “Down” is the first single from Fifth Harmony’s forthcoming third album via Syco Music/Epic Records, and is available now across all digital service providers. 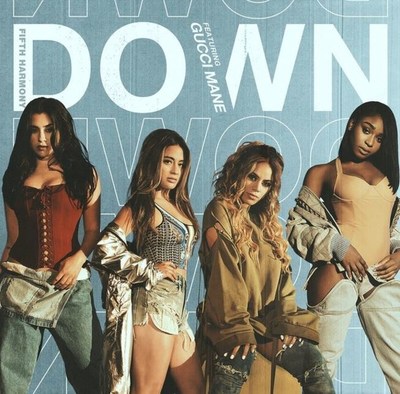 About Fifth Harmony:
Fifth Harmony returns with the much-anticipated release of new single “Down” feat. Gucci Mane, the first of new music from the group’s forthcoming album, due out in 2017 via Syco Music/Epic Records. “Down” follows the record-breaking success of Fifth Harmony’s sophomore album 7/27.  “Work from Home,” the album’s quadruple platinum certified first single, earned Fifth Harmony their first top 10 hit on the Billboard Hot 100, notching the top spot on both the Billboard Rhythmic and Pop Songs charts. Their second single “All In My Head (Flex)” is certified platinum, while their latest single “That’s My Girl” was another top 40 radio hit. The group’s accomplishments on the charts added to an award-winning 2016, with first-time wins at the American Music Awards, iHeartRadio Music Awards, People’s Choice Awards & Much Music Video Awards, their second win at the Nickelodeon Kids Choice Awards, two wins at the MTV Video Music Awards & Radio Disney Music Awards and three wins at the Teen Choice Awards. Fifth Harmony’s global 7/27 Tour began its North American leg that summer, hitting over 30 cities before heading to Europe in the fall and continuing on to Asia in early 2017. Fifth Harmony’s already successful 2017 kicked off with a performance at the People’s Choice Awards and has already brought the group wins for every nomination so far, including “Favorite Group” for the second year in a row at the People’s Choice Awards, three wins at the iHeartRadio Music Awards, two wins (Favorite Music Group & Fiercest Fans) at the Radio Disney Music Awards, and the two top honors – “Favorite Music Group” and “Favorite Song” – at the Nickelodeon Kids’ Choice Awards. In 2015, Fifth Harmony released their debut album, Reflection, which debuted at No. 5 on the Billboard 200 and has since been certified Gold. Reflection includes two platinum records, “BO$$” and “Sledgehammer” in addition to the quadruple-platinum success of the single, “Worth It.” The group is currently in the studio working on their highly-anticipated third album.