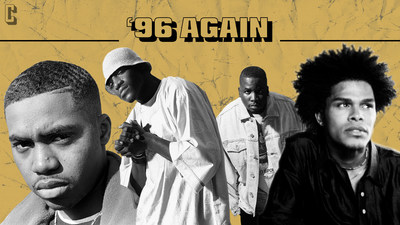 Throughout June 2021, the Black Music Month ’96 Again celebration will revisit the artists, albums and tracks that defined that iconic era with an immersive campaign featuring newly-curated playlists, video content, contests and rarities from 1996 available for the first time on all DSPs.

Individual explainer videos of three definitive hip-hop albums will be featured throughout Black Music Month ’96 Again. Each of the videos is a two-minute mini-documentary exploring the history of the album.

The video coming June 10 delves into ATLiens, Outkast’s second studio album, the American hip-hop duo’s outer space-inspired musical lens on contemporary Atlanta from street hustlers to extra-terrestrials. June 17’s mini-doc tells the story behind Ironman, the debut solo album from American rapper/Wu-Tang Clan cofounder Ghostface Killah. On June 24, a new Certified short video explores the history of It Was Written, the 1996 tour de force that catapulted Nas from the New York hip-hop underground into the American cultural mainstream with iconic tracks like “If I Ruled The World (Imagine That)” (featuring Lauryn Hill) driving the album into the #1 slot on the Billboard 200.

Every Friday during June 2021, Certified will rediscover treasures from The ’96 Vault, inviting fans inside to experience deep cuts and rare gems from their favorite artists, albums, sessions and shows from the era. Available on all platforms, The ’96 Vault presents ultra-rare remixes, iconic radio edits, instrumental jams, previously unreleased and out-of-print recordings and surprise content.

Available Friday, June 11:
Xzibit – “The Foundation” (from At the Speed of Life)
Keith Murray – “The Rhyme” (from Enigma)
Sadat X – “Hang ‘Em High” (from Wild Cowboys)

Available Friday, June 25:
Nine – “Lyin King” (from Cloud 9)
Smoothe Da Hustler – “Hustler’s Theme” (from Once Upon a Time in America)
Cella Dwellas – “We Got It Hemmed” (from Realms ‘n Reality)

Certified is dedicated to the history and influence of R&B and Hip-Hop, music that continues to shape the culture. With exclusive access to Sony Music Entertainment’s (SME) archives, Certified provides access to rare and unreleased albums, singles, remixes, photos and video footage from iconic SME labels like Jive, Loud, Ruffhouse, J Records, Arista, LaFace, So So Def, Profile, RCA Records, Epic, and Columbia—all to help tell the stories of undisputed classics of Hip-Hop and R&B.

Tag your best friends to see if they agree!! And also tell them to subscribe to our new podcast, Best Friend Energy, so you can listen to the first episode together on 10/11!! 🌈✨💕🥂🍭🍩 http://apple.co/bestfriendenergy

Join @GylesB1 & @susie_dent in their award-winning podcast not once, but twice every week on @Applepodcasts or by clicking right here👇
http://purpleplusclub.com 📖

Our new Network Highlight on @SonyPodcasts is available now in Discover!