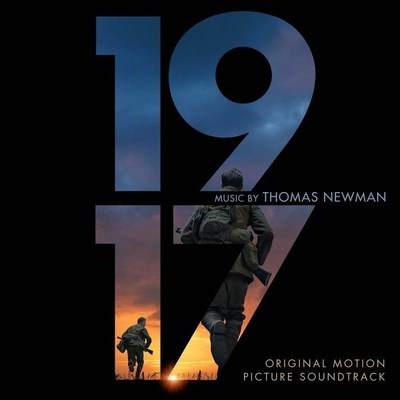 “Mostly, I wanted the music to propel action without complicating it, to hover passively at one moment, and land and propel at another,” says composer THOMAS NEWMAN of the score. “Because the movie takes place in present tense, the more the music commented on any particular action, the less exciting it was likely to be.  Sam and I talked frequently about how to earn those moments where music could be justifiably emotive, and likewise how music could get out of the way and avoid the trap of being overly written.  1917 is compelling, immersive drama without music, so the goal was to avoid accidental redundancy and to add richness and dimension to the drama only as it unfolded.”

Set at the height of the First World War, 1917 centers on two young British soldiers, Schofield (Captain Fantastic’s George MacKay) and Blake (Game of Thrones’ Dean-Charles Chapman), who are given a seemingly impossible mission. In a race against time, they must cross enemy territory and deliver a message that will stop a deadly attack on hundreds of soldiers—Blake’s own brother among them.

ABOUT THOMAS NEWMAN
Thomas Newman is an American composer and is widely acclaimed as one of today’s most prominent composers for film, having scored more than 80 film and television projects, earning 14 Oscar nominations and 6 Grammy Awards. Born in Los Angeles, his father was notable film composer Alfred Newman (1900-1970). He studied composition and orchestration at USC, and completed his academic work at Yale University. He early mentors included the noted film composer David Raksin, and legendary Broadway composer Stephen Sondheim.

A turning point in Newman’s career took place while he was working as a musical assistant on the 1984 film Reckless, for which he ultimately was promoted to the position of composer. Since then, he has contributed distinctive and evocative scores to numerous acclaimed films including Desperately Seeking Susan, The Lost Boys, The Rapture, Fried Green Tomatoes, The Player, Scent of a Woman, Flesh and Bone, The Shawshank Redemption, Little Women, American Buffalo, The People Vs. Larry Flynt, Oscar and Lucinda, The Horse Whisperer, Meet Joe Black, American Beauty, The Green Mile, Erin Brockovich, In The Bedroom, Road to Perdition, Finding Nemo, Lemony Snicket’s A Series of Unfortunate Events, Cinderella Man, Jarhead, Little Children, The Good German, Revolutionary Road, Wall-E,  The Debt, The Adjustment Bureau, The Help, The Iron Lady, The Best Exotic Marigold Hotel, Skyfall, Spectre, Side Effects, Saving Mr. Banks, The Judge, Finding Dory, Passengers and Steven Spielberg’s Bridge of Spies. Newman also composed the music for HBO’s acclaimed 6-hour miniseries Angels in America directed by Mike Nichols. He received an Emmy Award for his theme for the HBO original series Six Feet Under.