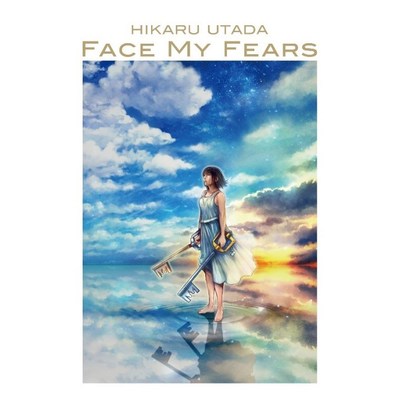 In addition to the EP pre-order being available, the English and Japanese versions of “Don’t Think Twice” are now available for streaming, as well as instant downloads with the purchase of the full Face My Fears EP. A vinyl release of the EP is also planned for Spring 2019.

Skrillex, a long-time and self-professed fan of the KINGDOM HEARTS series, originally intended to remix the previously revealed Hikaru Utada track, Don’t Think Twice. However owing to the pair’s friendship, this developed into the new and original collaboration, Face My Fears, to celebrate the game’s release.

KINGDOM HEARTS III will be available on 29thJanuary 2019 for Xbox One family of devices including the Xbox One X, and the PlayStation®4 computer entertainment system. For more information, visit: http://www.kingdomhearts.com/

Skrillex helped propel one of the largest shifts in modern American music in recent memory. At around the one-minute mark of his first Grammy acceptance speech in 2012, iPhone in hand, scrolling interminably down a list, it became clear that Skrillex doesn’t feel isolated from his peers. It’s always been a defining trait of his character, this aptitude at building things with others. It’s since gone on to characterize, color, and define his career, too. From his music to his label, his countless brand collaborations and his work on major Hollywood movies, Skrillex quite simply loves to make things. Despite being one of the biggest names in music, Skrillex hasn’t walked away from the ‘do-it-ourselves’ attitude he’s had since his start.

Hikaru Utada’s debut single “Automatic/time will tell”, released December 9, 1998, marked sales of double million copies, catapulting her into the ranks of top artists at age 15. Only a few months later, first album First Love set a CD sales record in Japan, which remains unbroken to this day. Ever since, all her albums have become #1 on the charts.  In 2007, single “Flavor Of Life” set the world record for downloads. In 2010 Utada went into indefinite hiatus in pursuit of “human activities”, but fully resumed her artistic activities in April 2016 with digital singles “Hanataba wo Kimi ni” and “Manatsu no Toriame.”  Her 6th studio album Fantôme, released September 2016, became her first to stay at #1 on the Oricon chart for four consecutive weeks. It also became #3 on iTunes US chart, and achieved sales of one million copies, CDs and digital downloads combined, enjoying high acclaim home and abroad. Utada signed with Epic Records Japan in March 2017.  2018 marks her 20th debut anniversary year; her 7th album Hatsukoi was released June 27. She finished her first domestic concert tour in 12 years in December 2018.

About the KINGDOM HEARTS III

In the upcoming action-RPG, KINGDOM HEARTS III, players can join forces with Donald Duck and Goofy for the adventure of a lifetime traveling across worlds based on beloved films like Disney•Pixar’s Toy Story, and Monsters, Inc., and Walt Disney Studios’ Pirates of the Caribbean, Big Hero 6, Tangled, Frozen and more.

About the KINGDOM HEARTS Series

KINGDOM HEARTS is a series of role-playing games created through the collaboration of Disney Interactive and Square Enix. Since the first KINGDOM HEARTS was released in March 2002 for the PlayStation®2 computer entertainment system, the series has expanded with several additional entries. The series celebrated its 15th anniversary on March 2017, and has shipped over 25 million units worldwide.

More information on Square Enix Ltd. can be found at http://finalfantasy.square-enix-games.com.