NEW YORK, July 13, 2018 /PRNewswire/ — One of the most acclaimed and distinctive film composers of his generation, four-time Academy Award® nominee Danny Elfman collaborates once again with director Gus Van Sant with his original score for Van Sant’s new Amazon Studios film Don’t Worry, He Won’t Get Far on Foot.  Opening nationwide July 13, the film is a based on John Callahan, one of the most iconic American cartoonists, and his one-of-a-kind story of struggle and redemption. Sony Classical releases the film’s original soundtrack recording on July 13. 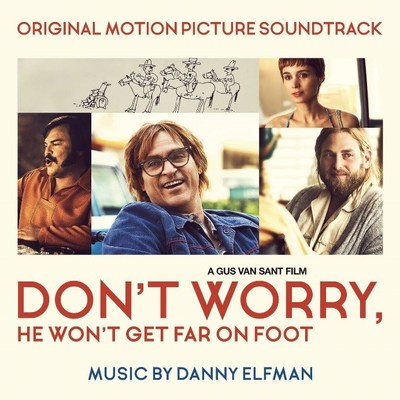 “The amazing and brilliant score for Don’t Worry, He Won’t Get Far on Foot is one of my favorite Danny Elfman musical compositions,” Van Sant writes, in his liner note for the original soundtrack recording. “It has one foot in stark reality, while the other foot has a sense of humor.”

A native of Los Angeles, Elfman grew up loving film music. He travelled the world as a young man, absorbing its musical diversity. He helped found the band Oingo Boingo, and came to the attention of a young Tim Burton, who asked him to write the score for Pee-wee’s Big Adventure. 34 years later, the two have forged one of the most fruitful composer-director collaborations in film history. In addition to his film work, Elfman wrote the iconic theme music for the television series The Simpsons and Desperate Housewives. He also composes actively for the concert stage, and a recording of his orchestral work Serenada Schizophrana has been released by Sony Classical. In 2017 Elfman premiered his first violin concerto in Prague, and this year, his first Piano Quartet commissioned by the Berlin Philharmonic Piano Quartet premiered at the Berlin Philharmonie.

Don’t Worry, He Won’t Get Far on Foot asks the question, “Is it possible to find humor – corrosive, taboo-shattering, laugh-till-you-cry humor – in the story of a 38-year-old- cartoonist who’s both a quadriplegic and a recovering alcoholic?” The answer is yes, if the cartoonist is John Callahan – whose infamous work has graced the pages of Omni, Penthouse and The New Yorker – and if he’s telling it in his own words and pictures.

Callahan’s uncensored account of his troubled – and sometimes impossible – life is also genuinely inspiring. Without self-pity or self-righteousness, this film tells us how a quadriplegic with a healthy libido has sex, what it’s like to live in the exit-less maze of the welfare system, where a cartoonist finds his comedy, and how a man with no reason to believe in anything discovers his own brand of faith.