NEW YORK, May 1, 2018 /PRNewswire/ — Few artists are as multifaceted as Esa-Pekka Salonen – not only in the way he combines his conducting success with his composing, but also in the scope of the repertoire that he has championed over the past 30 years and more. Available May 4, 2018, Esa-Pekka Salonen: The Complete Sony Recordings is the largest collection to date of the work of this vital figure in contemporary music-making. 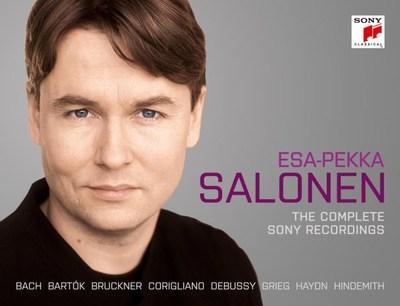 Despite the variety of Salonen’s musical interests, he has fashioned profound links with a handful of ensembles, all of which are represented here. On 23 discs he conducts the Los Angeles Philharmonic, where he is Conductor Laureate, having been Music Director for 17 years. On another 12 discs he conducts the Swedish Radio Symphony Orchestra, where he was Principal Conductor from 1985 to 1994. And on 14 he conducts the Philharmonia Orchestra, where he has been Principal Conductor since 2008 – and where his international career was launched in 1983, when he deputized at the last minute in Mahler’s Third Symphony.

It is his LA Phil recording of that symphony which is included here, however, along with a Mahler Four of “overriding accomplishment” (Gramophone) and a renowned Das Lied von der Erde with Plácido Domingo. The Californians also play on his recording of Bruckner’s Fourth, demonstrating the insight Salonen brings to the Romantic repertoire. Salonen’s early Nielsen cycle of symphonies and concertos with the Swedish RSO receives its first release here as a complete, eight-disc set. Another six discs show Salonen’s deft way with his compatriot Sibelius, with works including the Fifth Symphony and the enormous Kullervo (“The Los Angeles Philharmonic plays as if it has the work in its blood … this is an issue to treasure” – BBC Music Magazine).

Gramophone described Salonen’s recording of Messiaen’s Des Canyons aux étoiles with the London Sinfonietta as “an essential constituent of any library of twentieth-century music”, and Salonen’s classic Turangalïla is included here too. His Stravinsky is no less significant, and represented from the early ballets to the late Cantata. Ligeti’s revised Le Grand Macabre (a recording of “excellence” – New York Times) is included along with a “richly entertaining” (Gramophone) collection of shorter Ligeti works with the Philharmonia. “Salonen still ranks as Lutosławski’s foremost champion”, wrote AllMusic Guide, and this set also contains his take on the Polish composer’s music, including the Third Symphony recording that won a Grammy.

“What has made Salonen’s past recordings … so special has been not only his immense technical dexterity as a conductor but his insight into the music as a gifted composer in his own right,” wrote Gramophone of LA Variations, an album of Salonen’s own music. He brings this insight to bear not only in the repertoire mentioned above but also on music by Saariaho, Richard Strauss, Dallapiccola, and Debussy, as well as a host of others. And he is joined by soloists including Emanuel Ax, Gidon Kremer, Wynton Marsalis, Dawn Upshaw and Yefim Bronfman – whose Bartók recording with Salonen won another Grammy. Less expectedly, he also conducts an album of pop music by Anders Hillborg, sung by Swedish chanteuse Eva Dahlgren.

***CLICK TO TWEET***
[email protected]: The Complete Sony Recordings is the largest collection
to date of the work of this vital figure in contemporary music-making.
Get your limited-edition box set from @SonyClassical while supplies last here:
https://SonyClassical.lnk.to/E-P_SalonBxSC