NEW YORK, July 26, 2019 /PRNewswire/ — Sony Music today releases MEGHAN TRAINOR‘s “Run Like the River,” a new track written by the pop songstress for the forthcoming PLAYMOBIL: THE MOVIE (ORIGINAL MOTION PICTURE SOUNDTRACK).  Available everywhere now, “Run Like The River” is the lead offering from the soundtrack, which features score music by GRAMMY® Award-winning composer HEITOR PEREIRA (Despicable Me, The Angry Birds Movie, Smallfoot) and will be available everywhere Friday, August 2 – preorder now.  In addition to the track, Meghan joins the cast of the live-action/animated adventure comedy, lending her voice alongside Daniel Radcliffe, Anya Taylor-Joy, Jim Gaffigan, Gabriel Bateman, Kenan Thompson and Adam Lambert.  Directed by Lino DiSalvo and based on the best-selling children’s play sets, Playmobil: The Movie will make its theatrical debut this year.

Regarding her inspirational song for the movie, MEGHAN TRAINOR says she wanted the track to have a universal message for audiences around the world.  As she recalls, “I played it for the director when I first met him, and I said, ‘You should have songs like this in your movie.’ Then the next day they called and were like, ‘We want that song!’ It was just a magical moment.” 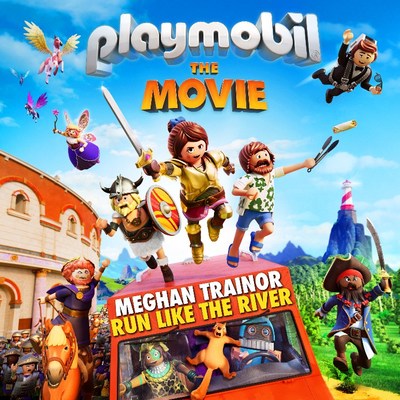 When her younger brother Charlie suddenly disappears into the magical, animated PLAYMOBIL® universe, Marla must embark on the adventure of her life to bring him home again. On her incredible journey through new exciting worlds, Marla meets very different, weird and heroic companions, among them the crazy foodtruck owner Del, the intrepid and charming secret agent Rex Dasher, a faithful, lovable robot, as funny as good fairy and many more.  In the course of their spectacular adventure, Marla and Charlie realize that you can do anything in life if you believe in yourself!

Directed by Lino DiSalvo in his directorial debut and written by Blaise Hemingway, Greg Erb & Jason Oremland, Playmobil: The Movie is produced by On Animation Studios.

ABOUT MEGHAN TRAINOR
Meghan Trainor first made history in 2014 with her diamond-certified smash single “All About That Bass.” The GRAMMY® Award-winning singer, songwriter, and multi-instrumentalist stands out as “one of only five female artists to achieve a diamond certification from the RIAA”—an honor bestowed upon only 15 other singles to date. Thus far, she has garnered a GRAMMY® Award and achieved eight multi-platinum singles and two platinum albums, sold out three world tours, penned multi-platinum hits for peers across pop and country, and received countless industry awards and nominations. Expanding her influence, she starred on FOX’s hit series THE FOUR: Battle for Stardom for two seasons. Following 2018 anthems “No Excuses” and “Let You Be Right,” she celebrated Valentine’s Day 2019 with the love-themed six-song The Love Train EP and to kick off the summer, she collaborated with dance music titan, Kaskade, for their song “With You,” paving the way for more surprises to come.