NEW YORK, Jan. 10, 2020 /PRNewswire/ — Sony Classical is pleased to announce the release of the recording of one of the world’s most famous classical music events: the 2020 New Year’s Concert with the Vienna Philharmonic under the direction of renowned conductor Andris Nelsons. The live recording is available digitally on January 10 and on CD January 24, 2020. The DVD and Blu-ray will be available March 6, 2020. 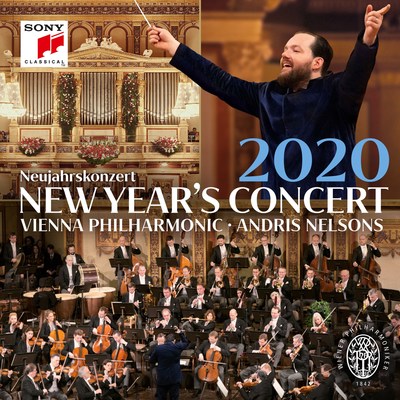 There are few concerts in the world that are awaited with as much excitement as the New Year’s Concert from Vienna. Directed by Andris Nelsons, the Vienna Philharmonic ushers in the New Year with a concert in the magnificent Golden Hall of the Vienna Musikverein. The concert is relayed to over ninety countries all round the world, reaching an audience of more than fifty million.

The 2020 New Year’s Concert will be conducted for the first time by the Latvian conductor Andris Nelsons, who first worked with the Vienna Philharmonic in October 2010 and who has been a regular and invariably welcome guest since then, not only at the orchestra’s subscription concerts in the Vienna Musikverein and at the Salzburg Festival but also on tours of Asia, the United States and Europe. So far he has appeared more than sixty times on the podium of the Vienna Philharmonic.

At the 2020 New Year’s Concert Andris Nelsons will be conducting a number of premieres that have not previously been heard at the Vienna Philharmonic’s New Year’s Concert. In celebration of the 250th anniversary of Ludwig van Beethoven’s birth, the 2020 Concert marks the first time that an original work by Beethoven will be performed at a New Year’s Concert. The seventh of his Contredanses WoO 14 is by some distance the most famous of the set since its central motif is a theme that the composer went on to use not only in his ballet music for The Creatures of Prometheus but also as the theme of his Piano Variations op. 35 and, above all, in the final movement of his “Eroica” Symphony, in which form it became famous all over the world. The waltz Seid umschlungen, Millionen also pays tribute to Ludwig van Beethoven, who chose to settle in Vienna at an early age.  Other works that will be heard for the first time in 2020 include the Overture to Carl Michael Ziehrer’s Die Landstreicher and three pieces by Josef Strauß, the sesquicentenary of whose death is being marked by the Vienna Philharmonic. They are his carefree waltz Liebesgrüße, his Liechtenstein March and his Cupido Polka. For the first time the 2020 New Year’s Concert will also feature the Postillon-Galop by the Danish composer Hans Christian Lumbye, who first came into contact with music by the Strauß family in Copenhagen and who went on to adapt their style to suit his own.

In addition to works by Josef Hellmesberger the Younger and Eduard Strauß, Andris Nelsons will also be conducting music by Johann Strauß the Younger, notably Wo die Zitronen blüh’n and the famous Tritsch-Tratsch-Polka.

Andris Nelsons was born in Riga and initially worked as a gifted trumpeter in the orchestra at the city’s opera house while at the same time training to become a conductor. He became principal conductor of the Latvian National Opera in 2003, assuming a similar role with the City of Birmingham Symphony Orchestra five years later. Since 2014 he has been music director of the Boston Symphony Orchestra and more recently was appointed Kapellmeister of the Leipzig Gewandhaus Orchestra.

The story of the Vienna Philharmonic Orchestra can be traced back to 1842, when Otto Nicolai conducted a “grand concert” with “all the members of the Orchestra of the Imperial and Royal Court Opera Theatre”. This event is generally regarded as marking the birth of the orchestra. Ever since it was founded, the orchestra has been run by a democratically elected committee and is artistically, organisationally and financially independent. In the twentieth century its artistic profile has been shaped by such leading musicians as Richard Strauss, Arturo Toscanini, Wilhelm Furtwängler and, after 1945, by three emeritus conductors, Karl Böhm, Herbert von Karajan and Leonard Bernstein. Since it was formed, the orchestra has given around 9,000 concerts in every part of the world. Since 1989 it has presented a Vienna Philharmonic Week in New York. A similar series of concerts has been held in Tokyo since 1993.