NEW YORK, April 20, 2018 /PRNewswire/ — Sony Music Masterworks has announced the release of How To Talk To Girls At Parties (Original Motion Picture Soundtrack), the musical companion to the hugely anticipated new film from award-winning writer-director, John Cameron Mitchell (Hedwig and the Angry Inch), based on the short story by Neil Gaiman (American Gods, Norse Mythology). The album arrives at all music retailers and streaming services on Friday, May 11. Out today ahead of the full soundtrack release is the single track, “Between the Breaths” from beloved indie-darlings, Mitski and Xiu Xiu. The A24 release of a See-Saw Films/Little Punk production, How to Talk to Girls at Parties opens in theaters across the U.S on May 25. StudioCanal UK releases the film across the UK on May 11. 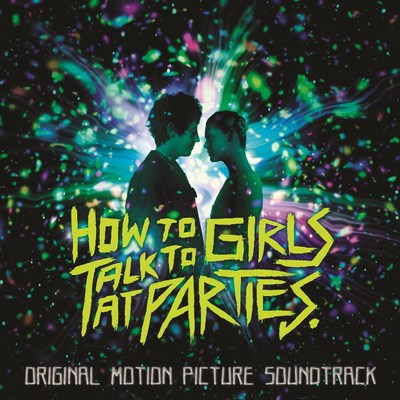 Hailed by VICE as “a bittersweet intersectional love story between a rebellious alien and an out-of-his-depth insecure schoolboy fanzine writer,” How to Talk to Girls at Parties is an electrifying and singular punk rock extravaganza set in the kinetic world of 1977 London. How To Talk to Girls at Parties (Original Motion Picture Soundtrack) includes new music and songs composed expressly for the film by such strikingly unique artists as Nico Muhly, Jamie Stewart (Xiu Xiu), and Matmos. In addition, the album features original songs performed by the film’s fictional punk band, The Dyschords, written by Bryan Weller and vocalist Martin Tomlinson (Selfish C***), alongside additional new music from the film performed by writer-director John Cameron Mitchell, cabaret legend Amber Martin, and How To Talk To Girls At Parties stars Elle Fanning and Alex Sharp. In addition, the soundtrack also gathers landmark tracks from such iconic artists as The Velvet Underground, The Damned, A.C. Newman, Ezra Furmanand, and the Prolific Urdoos (a.k.a. DIY punk hero Bruno Wizard of The Homosexuals).

“Naturally the film includes 70’s classics,” says Mitchell. “But DIY being both our medium and our message, this album favors the new stuff. I urge the reader to make things with her/his/their mates.  As with us, a wonderful time will be had by all.”

Adapted by Philippa Goslett and John Cameron Mitchell from the classic short story of the same name by Neil Gaiman, How to Talk to Girls at Parties was heralded earlier this month by an equally vibrant new trailer. Media outlets including NYLON and i-D raved, with the latter declaring that How to Talk to Girls at Parties “looks freakishly good.” “As he did with his film Hedwig and the Angry Inch, (John Cameron Mitchell has) created something that’s as much about a music scene and what it means to its fandom as it is about the characters or the story,” wrote The Verge. “It also looks like a visually bonkers wild ride.”

ABOUT THE FILM
From the raucous dual imaginations of fantasy laureate Neil Gaiman (American Gods, Coraline) and glam-rock multi-hyphenate John Cameron Mitchell (Hedwig and the Angry Inch, Shortbus) comes the electrifying and singular pop extravaganza film, How to Talk to Girls at Parties.  Enn (Tony® Award-winner Alex Sharp) is a shy suburban London teenager in 1977, sneaking out with his best friends to after-hours punk parties. One night they stumble upon a bizarre gathering of sexy teenagers who seem like they are from another planet. In fact, they are from another planet, visiting Earth to complete a mysterious rite of passage. That doesn’t stop Enn from falling madly in love with Zan (Elle Fanning), a beautiful and rebellious alien teenager who, despite her allegiance to her strange colony, is fascinated by Enn. Together they embark on a delirious adventure through the kinetic punk rock world of 1970s London, inadvertently setting off a series of events that will lead to the ultimate showdown of punks vs. aliens, and test the limits of how far each of them will go for true love. The film is produced by Howard Gertler, Iain Canning, Emile Sherman and John Cameron Mitchell. Michael Hill is the film’s music supervisor and the soundtrack’s producer, as well as a 2018 GMS Award winner for Lady Bird.

ABOUT JOHN CAMERON MITCHELL
John Cameron Mitchell directed, wrote and starred in the film Hedwig and the Angry Inch (2001), for which he received the “Directing Award (Dramatic)” and “Audience Award (Dramatic)” at the Sundance Film Festival as well as such additional honors as a Golden Globe Award nomination for “Best Performance by an Actor in a Motion Picture – Musical or Comedy.” His Broadway production of Hedwig garnered a 2014 Tony® Award for “Best Revival of Musical” as well as a rare “Special Tony Award” honoring his 2015 return to the role. Mitchell directed the sexually frank ensemble film Shortbus (2006), and an adaptation of the Pulitzer Prize-winning play Rabbit Hole (2010) which garnered an Oscar nomination for Nicole Kidman.  Recent recurring TV roles include HBO’s GIRLS, HBO’s VINYL, CBS’s The Good Fight, and Amazon’s Mozart in the Jungle. This summer will see Mitchell visiting Australia for eagerly anticipated concert performances of The Origin of Love: Songs and Stories of Hedwig, a new cabaret-style production that will feature songs from the musical and behind-the-scenes history into the show’s creation.

For more information on the film, please see the official How to Talk to Girls at Parties website.