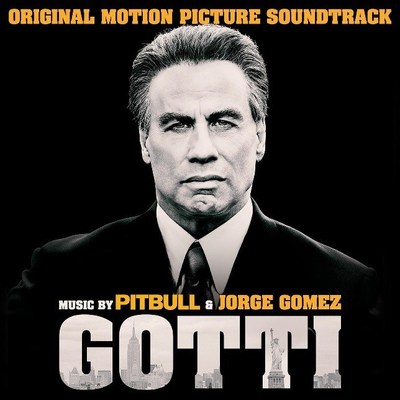 The soundtrack also includes three solo Pitbull tracks, one of them being the single “AMORE” featuring Grammy-nominated singer/songwriter Leona Lewis.

“Everything about Pitbull – his style, creativity, and culture make his scoring of Gotti – the perfect marriage of the artist and the material,” stated John Travolta.

“It’s a true honor to be involved with this project and working with icon John Travolta on the legendary story of Gotti,” said Pitbull. “By default, we were underdogs in our own right and found ways to survive against all odds.”

Leona Lewis says about the soundtrack: “I love working with Pitbull.  It’s always so much fun and his energy is just infectious. This record was really interesting to put together as it was something new for me.  Being a big movie fan, the fact that the song is in the GOTTI movie is so exciting.”

ABOUT GOTTI:
John Travolta (Academy Award® Nominee) stars as the legendary mobster John Gotti who was head of the largest and most powerful crime organization in North America, the Gambino Family. His flamboyant style, charm and ruthless personae made him the most famous mobster in the 20th Century. The story, told through the eyes of his eldest son John Gotti Jr., delves into the past and explores Gotti’s epic rise and fall in the mob. Gotti earned the name “Teflon Don” by the media, whom he did not shy away from, due to the FBI’s numerous unsuccessful attempts to convict him. Eventually he was sentenced to life in prison, and a young 24-year-old Gotti Jr. becomes the acting Boss of the Family. Gotti Jr. is also investigated and arrested by the FBI for his own connections to crime. Gotti Jr. ultimately rejects the legacy he was born into and walks away a “civilian.”

ABOUT PITBULL
From Mr. 305 to Mr. Worldwide, Armando Christian Perez, aka Pitbull, rose from the streets of Miami to exemplify the American Dream and achieve international success. His relentless work ethic transformed him into a Grammy®-winning global superstar, business entrepreneur and motivational speaker. Landing # 1 hits in over 15 countries, 10 billion YouTube/VEVO views, 70 million single sales and 6 million album sales, Pitbull does not stop. In addition to the United States, his sold-out world concert tours have taken him to North and South America, Europe and the Far East. He has also completed headlining tours in China and Japan. Along the way in his journey, he has co-headlined with Enrique Iglesias, spoken to thousands as part of Tony Robbins’ motivational seminars, and will open for Britney Spears in the U.K. and Europe this summer. Pitbull ushered in 2018 with his fourth annual New Year’s Eve event at Bayfront Park in Miami and capped off another stellar year in 2017 that included the release of his 10th full-length album, Climate Change, a second co-headlining U.S. tour with Enrique Iglesias, the release of his first-ever Greatest Hits, and a new Spanish single. Whether it’s his Voli 305 Vodka, currently in the process of becoming available nationally and has its own signature cocktails at multiple Sugar Factory American Brasserie locations, or the fragrance line “Pitbull,” his influence has catapulted. His first Las Vegas residency, “Time of Our Lives” at the AXIS at Planet Hollywood Resort & Casino, has now accomplished multiple consecutive runs with spring 2018 dates recently completed at the newly renamed Zappos Theater. Pitbull has unveiled plans for the Summer 2018 opening of iLov305, a new restaurant and nightlife concept on Miami’s famed Ocean Drive. In addition to his music for Gotti, starring John Travolta, Pitbull has signed on to the STX UglyDolls franchise, based on the ubiquitous pop culture Uglydoll characters. Pitbull will write and perform an original song for the film UglyDolls, slated for release in 2019, and lend his voice talent to one of the film’s key characters. Norwegian Cruise Line handpicked him as Godfather to Norwegian Escape, one of the most innovative cruise ships ever built. He recently completed his second Pitbull Cruise in March 2018. Globalization, his 24/7 commercial-free channel on Sirius XM (Ch.13), has become one of the platform’s fastest-growing channels following its 2015 launch. Pitbull also serves as ambassador to the Sports Leadership Arts and Management (SLAM!) charter schools he has helped to establish. Launched in the Little Havana section of Miami where he spent some of his youth, the SLAM! model has now expanded to Las Vegas and West Palm Beach, Florida, and has plans to launch the first student-run national radio broadcast.

ABOUT LEONA LEWIS:
The British singing sensation has sold over 20 million records worldwide, and reached #1 in over 35 countries with her hit single “Bleeding Love.”  A vocal powerhouse who is renowned for her vocal range and ability, Lewis is a 3-time GRAMMY Award nominee, 7 -time BRIT Award nominee, MTV VMA and World Music Award winner and has been nominated for MTV EMAs and Billboard Music Awards. Lewis became the first British female solo artist to top the US Billboard 200 album chart in more than 20 years with her debut album Spirit.

Leona is an extremely passionate humanitarian and animal rights activist working with a number of organizations including MTV Staying Alive. 2016 saw Leona nominated for a CMT Award and was recognized with the Music Pioneer Award at the United Nations Women’s Entrepreneurship Day.  Recently, Leona has made her Broadway debut in Andrew Lloyd Webber’s CATS playing the highly prestigious role of Grizabella, performing the world famous song “Memory”. Currently Leona is back in the studio recording and most recently released a duet with Calum Scott of “You Are the Reason” in February 2018.