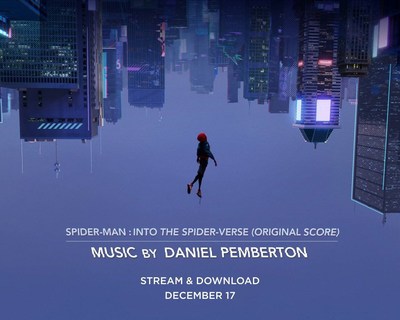 Phil Lord and Christopher Miller, the creative minds behind The Lego Movie and 21 Jump Street, bring their unique talents to a fresh vision of a different Spider-Man Universe, with a groundbreaking visual style that’s the first of its kind. Spider-Man™: Into the Spider-Verse introduces Brooklyn teen Miles Morales, and the limitless possibilities of the Spider-Verse, where more than one can wear the mask.

Daniel Pemberton says about the soundtrack: “It has been such a pleasure to enter the Spider-Verse with such an amazing array of collaborators and truly ground-breaking directors. I absolutely love this film, I love the risks taken, the story, the astonishing art style, everything. I feel so lucky to have been a part of it and to have the opportunity to create a whole new musical universe for one of the world’s most beloved superheroes – Spider-Man.“

ABOUT DANIEL PEMBERTON
Daniel Pemberton is a multi-Golden Globe, Emmy and Bafta Award-nominated composer who has been regularly cited as one of the most exciting and original new voices working in modern film scoring today. Constantly working with some of the most renowned names in the industry Pemberton has already scored projects for the likes of Danny Boyle (Steve Jobs), Ridley Scott (All The Money In The World, The Counsellor), Aaron Sorkin (Molly’s Game), Darren Aronofsky (One Strange Rock) and Guy Ritchie (The Man From UNCLE).

His bold writing and unusual and innovative arrangements on scores for movies has seen the soundtracks constantly singled out for critical acclaim whether they are studio films such as such as “Oceans 8” and “King Arthur: Legend of the Sword” or smaller independent features such as the Cannes Palm D’Or nominee “Mal De Pierres” (starring Marion Cotillard). He has received Golden Globe nominations for his mix of opera and electronics in the score to Danny Boyle’s “Steve Jobs“ (starring Michael Fassbender and Kate Winslet) as well as one for Best Original Song – performed and co-written by Iggy Pop – for the Stephen Gaghan film ‘Gold‘ (Starring Matthew McConaughey). He was recently nominated for an Emmy for his work on the groundbreaking ‘USS Callister‘ episode of Black Mirror for Netflix. He was previously honoured as Discovery of The Year at the World Soundtrack Awards in 2014 and nominated as Composer of the Year in 2016. Spider-Man™: Into the Spider-Verse marks his first foray into feature length animation.