NEW YORK, March 16, 2018 /PRNewswire/ — Sony Music proudly announces the release of TOMB RAIDER (Original Motion Picture Soundtrack) featuring the music of Dutch composer Tom Holkenborg, a.k.a. Junkie XL. The soundtrack will be released digitally and on CD on March 9. The movie will be released in theaters in the U.S. on March 16. 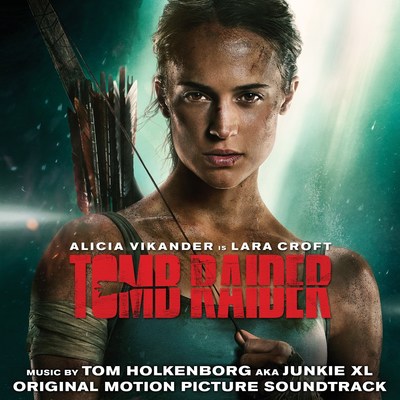 “I am really pleased that Director Roar Uthaug invited me to be part of his reimagining of Lara Croft and Tomb Raider. Lara is such a strong female protagonist and Roar and Alicia’s vision for her feels very fresh, raw and human, but also really out-there. It was a joy to be given the chance to approach this score from a really edgy place,” says Holkenborg.

ABOUT TOMB RAIDER:
Lara Croft is the fiercely independent daughter of an eccentric adventurer who vanished when she was scarcely a teen. Now a young woman of 21 without any real focus or purpose, Lara navigates the chaotic streets of trendy East London as a bike courier, barely making the rent. Determined to forge her own path, she refuses to take the reins of her father’s global empire just as staunchly as she rejects the idea that he’s truly gone. Advised to face the facts and move forward after seven years without him, even Lara can’t understand what drives her to finally solve the puzzle of his mysterious death.

Leaving everything she knows behind, Lara goes in search of her dad’s last-known destination: a fabled tomb on a mythical island that might be somewhere off the coast of Japan. But her mission will not be an easy one; just reaching the island will be extremely treacherous. Suddenly, the stakes couldn’t be higher for Lara, who – against the odds and armed with only her sharp mind, blind faith and inherently stubborn spirit – must learn to push herself beyond her limits as she journeys into the unknown. If she survives the perilous adventure, it could be the making of her… earning her the name of tomb raider.

ABOUT TOM HOLKENBORG:
Tom Holkenborg, aka Junkie XL, is a Grammy® nominated and multi-platinum producer, musician, and composer whose versatility puts him on the cutting edge of contemporary music, as well at the vanguard of exciting new film composers. His film scoring credits include Mad Max Fury Road, Deadpool, Black Mass, Divergent, Brimstone, The Dark Tower and the forthcoming Tomb Raider origins story.

Tom is able to draw on his extensive knowledge of classical forms and structures while keeping one finger planted firmly on the pulse of popular music. When this eclectic background is paired with his skill as a multi-instrumentalist (he plays keyboards, guitar, drums, violin, and bass and describes himself as a ‘full contact composer’) and a mastery of studio technology, a portrait emerges of an artist for whom anything is possible.

The foundation for Tom’s career started in his native Holland where he created multiple film scores, and undertook mentorships with celebrated composers Harry Gregson-Williams (on Domino and Kingdom of Heaven) and Klaus Badelt (on Catwoman). But things really started to fall into place when Tom started collaborating with Oscar®-winning composer Hans Zimmer. Their partnership lasted several years, and most recently included 2016’s blockbuster Batman vs Superman, which marked the seventh scoring collaboration between Holkenborg and Zimmer. Holkenborg worked with Zimmer on The Amazing Spider-Man 2 (2014), Man of Steel (2013), Dark Knight Rises (2012), Madagascar 3 (2012), Megamind (2010), and Inception (2010).

Holkenborg’s music career began in 1993 when he started the industrial rock band Nerv and was also producing hardcore and metal bands like Sepultura and Fear Factory. Drawn by electronic breakbeats he started Junkie XL in 1997 debuting with the album Saturday Teenage Kick. Holkenborg went on to produce five more albums under the moniker while playing headline shows all over the world. In 2002 the producer remixer scored a number 1 hit in 24 countries with his rework of A Little Less Conversation. Following the success, Holkenborg collaborated with celebrated artists like Dave Gahan, Robert Smith, Chuck D, and remixed artists such as Coldplay, Depeche Mode, Britney Spears, Justin Timberlake and many more. In addition Holkenborg created the music for video games like FIFA, Need For Speed, The Sims, and SSX and commercials for global campaigns such as Nike, Heineken, Adidas, Cadillac and VISA.

Throughout his career, education and mentorship have been key themes for Tom. He created a Bachelor Program at the renowned ArtEZ Conservatorium, in his home town of Enschede, for music composition, from which more than 200 students have graduated, and continued his commitment to education on digital platforms, producing the online tutorial series, Studio Time.

Tom says about the soundtrack: “We spend a lot of time on the ‘island’ in the movie. It is otherworldly and wild, and I wanted to get people out of their comfort zones with some eerie crescendo moments. I spent months having custom pacific drums built, which I played myself to create insane adrenaline inducing rhythms. I also distorted our orchestral recordings, which yielded some unsettling qualities within the score. I want to thank Director Roar Uthaug for letting me push the envelope on this project. It was a lot of fun.”